Cronies plundering the Banks;  over 50 percent of independent directors of the banks and PSUs are BJP politicians:    Prashant Bhushan 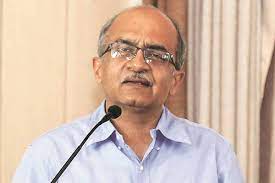 New Delhi: All India Bank Employees Association in its mission to share all the facets of banking sector on Friday invited Shri Prashant Bhushan, Supreme Court lawyer and social activist, to be the speaker and share his perspective on the theme People’s Money for People’s Welfare.  While addressing attendees at the AIBEA National Seminar, he said that our Banks are facing serious problems because of continuously increasing bad loans, especially pertaining to the huge corporate companies.

Further elaborating on the situation, Shri Prashant Bhushan discussed various results of the undue pressure by the government under which the public sector banks have been operating.  In the session, Mr. Prashant Bhushan stated that Banks were custodians of public money, hence the ownership of Banks holding the money of common people of the country could not be left to private entities.   That was the philosophy that guided nationalisation of Banks five decades back which has served the cause has much relevance in contemporary times also.

As far as disbursement of such public money as loans for productive purposes, Banks have played a constructive and development role.

However, Non-Performing Assets (NPAs) were growing by leaps and bounds mainly due to corporate lending to crony capitalists as dictated by political powers.  To cover up, evergreening of loans also took place in the name of corporate debt restructuring.  The role of Directors of the Banks was also under suspicion.  The present Government dispensed with appointment and continuation of Employee/Officer-Director in the Board that would have acted as a check-point in the governance, he said.

Mr. Prashant Bhushan further said, “there should be complete transparency on disclosure of loan default by any borrower from the Banks.  List of wilful defaulters must be published in the public domain in web sites and such defaulters must not be given loans in future.”

Unfortunately, privatisation of Banks was being advocated by the policymakers.  This was only a diversionary misstep, he said.

He pinpointed the wrongful appointments of the independent directors that often fall under the conflict of interest.  Not only in Banks, in many public sector units,  persons who are not really fit for the job are appointed as independent directors, for 50% of them, the only qualification is that they belong to BJP.

Mr. Bhushan opined that when millions of people are starving for jobs, the normal posts in banks and other government sectors are unfilled.   He felt that the time has come in India to demand the right to job, which can be on some norms of minimum wage, etc.   He further detailed the suggested measure wherein if the government fails to provide the job then the candidate must be paid at least half the standardised wage as compensation or unemployment dole.

Shri Prashant Bhushan shared the possible solutions that might be adopted to deal with the frequently sprouting scams in the Indian Banking system:

·       Complete transparency must be brought by putting out the data on defaulters in the public domain.

·       The defaulters must be barred from the facility of availing any more loans.  In case he is a promoter with any other entity, the same must be followed for those as well.

·       Employee and Officer Directors are to be appointed immediately

The speaker summed up the session reinstating that privatization policy being devised by the current government is not the right solution to the underlying challenges.

Concluding the seminar, AIBEA reiterated that the association will continue fighting against the privatization of the banking system in India and if need be will knock the door of the judiciary system.

Huge quantity of arms and ammunition recovered from Indo-Myanmar border