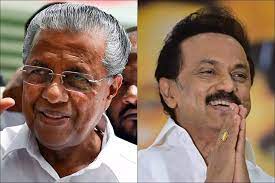 Like many opinion polls and popular perception, the just released exit polls also unanimously forecast a clear and convincing victory for the DMK-led UPA in Tamil Nadu Assembly polls 2021. M K Stalin-led DMK and allies are likely to get anything above 150 seats out of the total 234 and form the government in the state unseating the AIADMK from power, The AIADM-BJP combine along with their allies are projected to win below 60 seats.  According some experienced pollsters “need not be surprised even if the total tally of the DNK combine go beyond 170-175, for there was the popular sentiment was against the AIADMK, for the hardcore Dravidians did not accept the party’s  electoral alliance with the  BJP”

Tamil Nadu went to polls in a single-phase poll on April 6 and the counting of votes is on May 2.

The ruling AIADMK had tied- up with the Pattali Makkal Katchi (PMK) and also the BJP, while the DMK joined hands with the Congress and CPI(M) for the assembly polls. The newly formed Makkal Needhi Maiam of tinsel star Kamal Haasan also was in the electoral fray, in alliance with some regional parties, but hardly expected to make any impact. The estranged AIADMK leader TTV Dhinakaran, who floated his own party AMMK who won an assembly by-poll comfortably last time, has this time contested in alliance with Asaduddin Owaisi’s AIMIM.  According to poll prediction Dhinakaran is unlikely to sail through.

In Puducherry, as forecasted by multiple opinion polls the BJP- AIADMK –AINRC alliance has an upper hand in the Assembly polls 2021. The BJP combine is poised to rule the Union Territory winning anything above 19 out of 30s.   The Congress that was ruling Puducherry for just less than five years, in alliance with the DMK is expected wins below 11 seats and loses power.

In Kerala the electoral expectation is, Pinarayi Vijayan could come back to power for the second term in a row with the CPM-led LDF posed to will win anything around 75 seats. Most of the post poll surveys have predict a slight edge and expect the LDF to win anything around 72-78 seats. In the 2016 assembly elections LDF had won 91 seats. The Congress- led UDF alliance is projected to win between 58-64 seats, an increase of 11-17 seats. The NDA alliance led by the BJP is expected to improve its tally by a couple of seats. In 2016 the saffron party had just one member, the Octogenarian O Rajagopal who won from Nemam constituency in Thiruvanathapuram, the state capital, defeating CPM strongman Shivan Kutty by a comfortable margin of around 8000 votes.